06
Aug 2015
Landsberg am Lech, 04 August 2015 – Bright sunshine, one of the most beautiful and demanding natural racetracks in Germany and both 3C Racing Team riders on the podium – one of them on the top step. In front of a dream crowd of 34,700 spectators, Xavi Forés won the first IDM Superbike heat at the Schleizer Dreieck last weekend. And Ducati took the lead in the Manufacturers' Championship too.

For the roller coaster track in Thüringen, the Spaniard once again opted for the hybrid version of the Ducati 1199 Panigale. Based on the 2014 chassis and the 2015 electronics, he had already won in Hungary on the bike. Given the advantages offered by the chassis, team colleague Lorenzo Lanzi went for a complete 2014 version. During qualifying, both riders made it into the Superpole. During the ten-minute session, it was decided that Forés would start the race from the first row and Lanzi from the second.

In the end, only Forés and the current overall leader Markus Reiterberger (BMW) were competing for victory in the two heats. During the first race, both riders challenged each other with tactical tricks virtually the whole time. Forés was in the lead over a greater distance. In the third lap from last, Reiterberger stormed ahead but was immediately pushed back into second place. On the last chicane, both riders were neck and neck. Forés crossed the line to turn into the bend and Reiterberger had to back off. And Forés had the better cards when accelerating away again anyway. With a slim lead of just 0.077 seconds, the defending champion was waved across the finishing line in first place. During the presentation ceremony, Xavi was very emotional and dedicated his triumph to his fellow countrymen and racing colleagues who had been killed in an accident at the Moto America two weeks earlier. "There were three of us on the motorbike today."

Forés took the lead early on in the second heat too. However, the 29-year-old was unable to counter after Reiterberger edged past him half way through and finished second after 18 laps. Lorenzo Lanzi finished third twice over the weekend. The points scored by the Panigale riders at the Schleizer Dreieck allowed Ducati to take the lead in the IDM Superbike Manufacturer's Championship. With 370 points, the Italian manufacturer is now ahead of BMW (266) and Yamaha (184). The next race will take place in Assen, the Netherlands this coming weekend (8/9 August 2015). 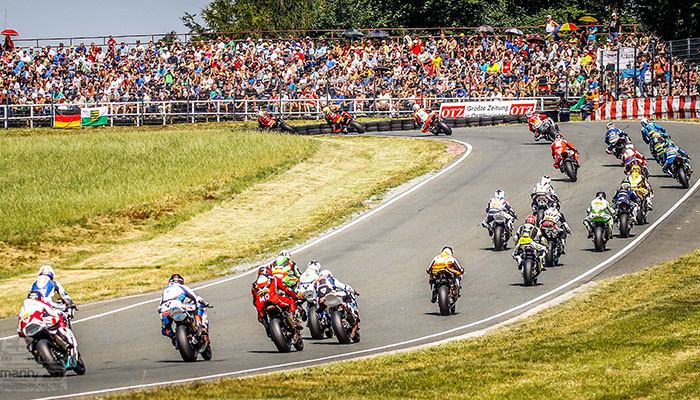